What’s a Hashtag – and How Can You Use Them?

This next week I’ll be in Oakland, California at the DiversityRx Eighth National Conference on Quality Health Care for Culturally Diverse Populations supporting attendees in the use of social media. This is a very exciting opportunity for me because I get to do one of the things that I love most – teach people about social media! One way that I’ll meet and interact with attendees at the conference is through the social media backchannel.

Attendees will have the opportunity to connect with each other, the conference sponsors, and presenters through what the social media industry calls a backchannel. On the backchannel people will share opinions, resources, and ideas while networking with each other or while a speaker is presenting.

The most common backchannel is a Twitter backchannel where attendees are using a hashtag to converse with each other. You might be wondering, “What’s a hashtag – and how can I use one at the next networking event, tradeshow, or conference I attend?” As a good starting point, here is how Twitter defines a hashtag:

Still sounds like gobbledygook? Don’t worry, you’re not alone! I’m going to break it down for you using the DiversityRx Conference as an example so that, hopefully, it will make more sense. At the DiversityRx Conference those individuals who have a Twitter profile set up will have their smartphones, laptops, or iPads out while they are attending conference sessions and will be live Tweeting over the internet while they’re listening to the speakers. The way I think of it is that they’re taking notes on Twitter while listening to the presenter. However, because of how Twitter works, these ‘notes’ or tweets, are 140 characters in length and entirely public. Therefore, other attendees who also have a Twitter profile can search and find the tweets that other attendees are posting. But how do they find those tweets if they don’t know the other person’s Twitter username? This is where a hashtag comes in! 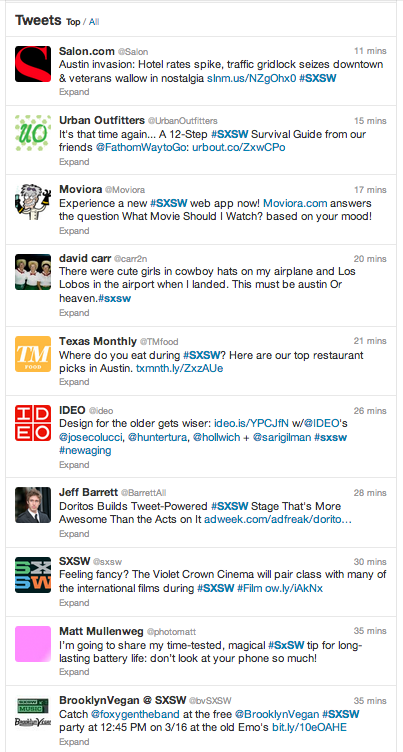 While I’m sitting and tweeting at an event, I want to be sure that everyone else on Twitter who’s also at the event can see my brilliant thoughts! This is why I insert a hashtag into each tweet so that my tweets are easier to find. For the DiversityRx Conference we have set #DivRx as the hashtag for the event. This means that every time I tweet I insert #DivRx at the end of my tweet. #DivRx becomes hyperlinked and when someone clicks on it they will be able to see all of the other tweets on Twitter that contain that hashtag.

A good example of a hashtag that is currently being used during a huge event is #sxsw for the South by Southwest (SXSW) Conference starting today. Check out the Twitter backchannel for #sxsw. Pretty incredible huh? People are sharing quotes from speakers, resources, opinions, and ideas – all while the conference is taking place.

Without that #sxsw hashtag in each tweet it would be very, very difficult to have a connected, public conversation about the SXSW Conference. For this reason we will all tweet using the hashtag #DivRx at the DiversityRx conference. This allows us to connect and interact with each other on Twitter, and then hopefully in person as well.

The one thing to remember when using a hashtag is to make sure that there are no spaces and no punctuation. If I tweet with # DivRx at the end of my tweet, DivRx won’t get hyperlinked, and my tweet won’t become a part of the backchannel. The same is true of punctuation. As soon as you enter punctuation, it clips the hashtag. So if I was to tweet #Div,Rx the hashtag would become #Div and Rx would just be hanging out. 🙁

Try using a hashtag at your next networking event! Ask the people hosting the event if there’s a Twitter hashtag for the event and then insert that hashtag into the tweets that you would like to be a part of the backchannel. If you have any questions, feel free to ask them in the comments section below.